The Plight of the Bilby

The Australian Bilby is a shy, nocturnal marsupial unique to Australia. In earlier times, they were found across large areas of Australia but numbers have declined rapidly in the last 100 years, due to competition for food with farm livestock and the introduction of feral rabbits introduced into Australia following European settlement. With this in mind, the Bilby was officially classified nationally (excluding Queensland where it is recognised as endangered), and internationally as Vulnerable to Extinction.

With its depletion made public and the outcry to ensure that this Australian native wouldn’t become extinct, Melba’s received correspondence from a small school community pleading for awareness…

Now a significant part of any Australian Easter, you might not be aware of the Bilby’s humble beginnings in the country-town of Woodside, South Australia.

In 1993, our team received a petition from an eight-year old school girl, Rebecca Hart and her classmates asking Melba’s to produce an Easter Bilby. Described as one of the “cutest pieces of correspondence ever received,” Joy Foristal found the request irresistible. Rebecca sought to create awareness of the plight of the Bilby through their production. It was an inspiring letter to receive, and with the children’s excitement at the forefront of Joy’s mind, the wheels were set in motion for the Easter Bilby.

It was soon after receiving the letter, that Joy and Graeme, together, began working on the production of the Bilby. Through the encouragement of the community, the Australian native treat took off, with its popularity soaring. Visitors from around the state, country, and world for that matter, were intrigued by the native Australian animal, only encouraging what Rebecca initially sought; awareness of its plight.

From its inception, the Bilby has become a staple Australian Easter treat, with thousands upon thousands sold every year, in various sizes and flavours. At our Woodside factory, you can now purchase these bite-sized treats year round, with their popularity amongst tourists only growing. As for our hollow forms, these Melba’s Bilby’s are available in Milk, White and Dark Chocolate. Being an iconic Australian animal, these certainly are a popular Easter specialty; flying off the shelves every year.

Through the production of the Easter Bilby, awareness of their endangered status has become more prominent, and indeed at the forefront of conservation efforts.

To get your hands on one for this Easter, either pop in store or visit us online. Our full Easter range is available for guaranteed pre-Easter delivery until 6th April 2017. If you require urgent delivery or have any particular questions, please contact our Woodside factory on (08) 8389 7868 or email us. 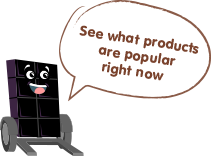